The sun is the most abundant source of energy. The earth receives almost 173 terawatts of energy from the sun in the form of solar power. This is almost 10 times more energy than the total amount of energy used by the world’s whole population. But then why ain’t we still rely on solar-power fully? To answer this question, you need to know how do solar panels work for your home or for any place.

How Silicon Is Made From Sand?

To convert sands into pure silicon, there is a reaction which you need to perform. When sand reacts with the carbon at 2000°C, pure silicon forms. We need to get 99.999% pure silicon from sand to use them in the solar cells.

This polycrystalline silicon gets cut into thin plate sizes which are known as silicon wafers. This is the most important part of the photovoltaic cell.

In these silicon wafers, the silicon atoms are bonded together and there is no free electron to move and generate electricity so, we need to inject phosphorous and boron in wafers to have free electrons and holes to produce current.

When we inject phosphorous atoms with 5 valence electrons into the wafers, there is one free electron to move in every atom. This is called an N-type conductor. So, when light energy(photons) strikes on such metal, electrons get excited and start moving here and there but there is no fixed direction of moving and because of this we can’t use those electrons to produce current.

How Does Electric Field Of Depletion Layer Help To Produce Electricity?

When photons of sunlight strike on the depletion layer, the electrons and holes get separated and again and become free to move but this time because of the presence of the electric field, the free electrons go to the extreme end of the N region and holes go to the end of P region.

Because of the presence of charge carriers in the ends of wafers, one potential difference creates and if you connect and bulb wire with two ends, the electron starts flowing thru the wire, and the bulb glows.

One solar cell can give 0.5V only but if you put them together, its voltage will increase. Almost 12 cells together can charge a cell phone. In this way, you need many modules to light an entire house.

How Solar Panels Are Formed?

There are almost 5 layers in the solar panel and in middle, there is the layer of cells. There are a lot of photovoltaic cells that are connected with each other with the help of a copper wire in series. When we connect these types of so many series of PV cells in parallel, one layer of cells forms which is present in the middle layer of the solar panel.

There are EVA sheets over and under the cell layer in order to protect it from dust, vibrations, shocks, etc. And finally, on the very top and under, some plastic is there to protect from rain or anything.

Note: Monocrystalline cells offer higher electric conductivity but because of its high cost, it is not used widely.

How Do Solar Panels Work For Your Home?

There can be many reasons of dropping the voltage of the solar panels and some of the possible reasons are:

How To Increase Efficiency Of Solar Panels

There are many ways to increase the efficiency of solar panels and some of them are: 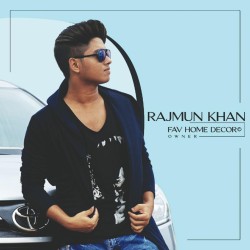 I am Rajmun Khan from India, owner of favhomedecor.com. Studying computer science and engineering. I have so much interest in home appliances and stuff. So, I learn them, implement them, and share the knowledge here.

Favhomedecor is a participant in the Amazon Services LLC Associates Program, an affiliate advertising program designed to provide a means for sites to earn advertising fees by advertising and linking to amazon.com

close
We use cookies on our website to give you the most relevant experience by remembering your preferences and repeat visits. By clicking “Accept All”, you consent to the use of ALL the cookies. However, you may visit "Cookie Settings" to provide a controlled consent.
Cookie SettingsAccept All
Manage consent

Any cookies that may not be particularly necessary for the website to function and is used specifically to collect user personal data via analytics, ads, other embedded contents are termed as non-necessary cookies. It is mandatory to procure user consent prior to running these cookies on your website.